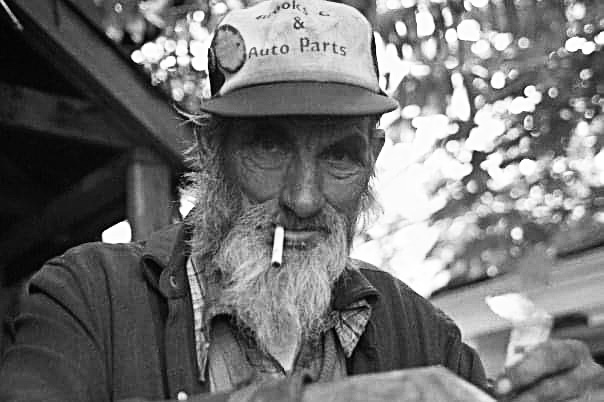 An old grizzled drunk from a television western stumbles out of the tube and staggers smack into the middle of a milieu of vagrants one might encounter in a Bukowski novel. It’s Uncle Ray, rolling into the courtyard with a shopping cart stuffed with clothing and other items of unspeakable origin.

“Uncle Ray, is it true you’re an undercover agent with the CIA,” I say.

Ask me to guess Ray’s age and I’d say he was born sometime between the beginning of the William Taft presidency and the year they started putting toy surprises in Cracker Jack boxes. I figure he’s something north of seventy, with an extra decade or two of hard living in his back pocket.

Uncle Ray claims to have served in both the second world war and the Korean conflict and some say he’s a war hero. Others regard him as a sage, a holy fool, a royal pain-in-the-ass, and a mad saint. Most agree he’s a person squarely in the back row.

“If you’re looking for Hershel, he’s not here.” Ray’s face lights up when I mention the name.

Hershel is Uncle Ray’s guardian angel and Ray is drawn to him like a homing pigeon. Whenever Ray staggers into the courtyard, from sickness instead of drunkenness, Hershel is there to escort him to White Bird Clinic to get treatment. If saints exist, they are mere samaritans compared to Hershel Bloom.

I raise my eyebrow. Lenny hates Ray with a passion usually reserved for drunken frat boys and Ronald Reagan. Ask anyone that was around the day Lenny Nathan shook his finger with rage at Uncle Ray and yelled, “You stay away from my place or I’ll kill ya!” The old derelict is definitely not looking for Lenny.

Someone calls my name. It’s Sally, announcing my lunch from the kitchen of Lenny’s Nosh Bar.

As I get up to leave, Uncle Ray is looking forlorn and gazing mournfully across the courtyard at Poppi’s Greek Taverna. I suddenly realize exactly who he is looking for and the reason he’s in the courtyard. He’s here for his chicken and chocolate fix from Poppi, who feeds him on the regular from the back door of the restaurant. Provided he’s sober. If Ray shows up in the courtyard drunk, she gives him a cup of hot black coffee and tells him to go away and come back when he’s lucid.

Inside, I ask Sally what time Lenny is arriving.

“Anytime now,” she says. “Are you worried he might read Uncle Ray the riot act?”

“Well, yeah, but Lenny told me to stop in later today,” I say. I tell Sally I saw Lenny at the store earlier in the day as he was unloading his basket at the register and I saw the ingredients he was buying and made the logical deduction. I tell her how the conversation went down.

“So you’re here for an off-the-menu item,” she says. I give her a big grin and nod my head. She whistles and says, “Brave man.”

“Oh yes,” she says. “Lenny gave me a pot brownie the first night I worked the counter. I was on probationary status and I have never been so stoned in my life.”

“Trial by reefer,” I say. She laughs.

“The next day he called and, before he could say anything, I apologized all over myself and asked how badly I’d done. The whole shift was a blur.”

“I dunno,” she says. “Lenny just chuckled and said ‘yeah, that was pretty good shit’ and officially gave me the job.”

I notice Uncle Ray through the window, standing a respectful distance from Lenny’s. He’s lighting a cigarette, which is gripped tightly between straw-colored fingers, and his hand is trembling.

“I think Ray is waiting for Poppi to show up and open the restaurant,” I say, as I head over to the booth next to the jukebox.

“Someone should probably tell Ray that it’s Tuesday,” Sally says.

“I’m sure he knows it’s Tuesday,” I say. “I sure do, because it’s ninety-nine cents for hot fudge sundaes all day at Puckler’s today, and it’s going to be a mob scene tonight. I’m heading over after I eat.”

She’s right, I completely forgot about the significance of Tuesday. Beyond my own selfish connection to the day. So, I set my sandwich on the table and head for the door to break the bad news. Dan Schmid is already on the job, standing in the doorway of the restaurant. Dan is around because he works as the cleaner at Poppi’s every Tuesday, an eight-hour job that requires him to thoroughly clean everything in the place, from kitchen surfaces and appliances to all the curtains covering the windows.

Dinner plans thwarted, Ray seems ready to launch into one of his cantankerous rants against a cruel world that has conspired against him since the end of the second world war.

“There’s nobody around to cook up some chicken for you,” Dan says. “But, I can get you some hot chocolate.” Ray grunts and seems mollified. Dan goes back inside the restaurant to fetch Ray’s hot cocoa. I turn to Sally.

“It’s not the first time Ray has shown up for chicken and chocolate on the wrong day,” she says.