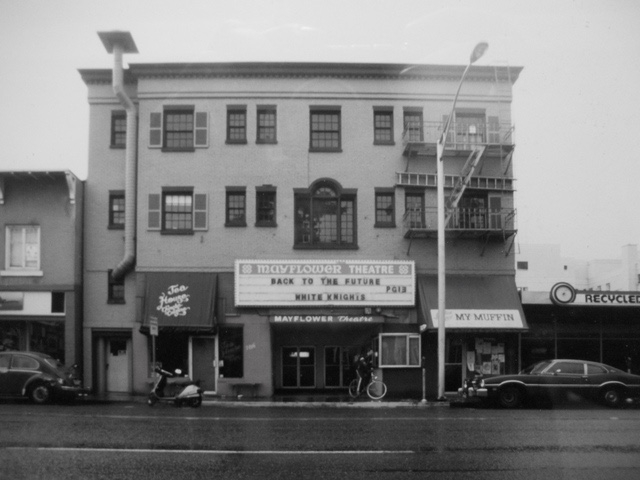 This 600-seat single-screen cinema opened as the Colonial Theater on September 30, 1925 at 788 East 11th Avenue in Eugene Oregon and was renamed the Mayflower Theater on July 1, 1935. A year later, in 1936, the Robert Morton Pipe Organ installed in 1922 (used to play music from its 377 pipes to accompany silent movies that screened there for a decade) was sold to Riverside Community Church in Hood River, where it remained until 1973.

A unique feature of the Mayflower Theater was the large glass windows located upstairs next to the projection booth through which audience members could watch films and listen to the muffled dialogue while waiting in line to use the restrooms. They were much appreciated by cinephiles with weak bladders as the line was frequently long because there were only two single-occupancy restrooms.

Almost a half a century after it opened the Mayflower Theater was in decline. When I moved to Eugene in 1976 the seats were rickety and the seat cushions had lost their cushiness. The red curtains covering the walls were dirty and frayed and the auditorium was either stiflingly hot or freezing cold depending on the weather outside.

But this was funky old Eugene just before home video hit the market and in 1977, after the first-run films that played during “normal” hours, there were also movies playing every Thursday, Friday, and Saturday evening at midnight for the discounted price of 98 cents. Movies like Harold and Maude, A Clockwork Orange, The Last Picture Show, and Monty Python and the Holy Grail came and went and then came again.

Monty Python’s masterpiece of absurdity was a film I’d partly seen in Berkeley in 1975, but the experience was interrupted when my mother’s housemate Bianca freaked out while the Black Knight was being dismembered—even though he insisted it was “just a flesh wound.” Bianca was a sensitive soul and—horrified by the comic violence—she fled from the cinema, but not before she guilt-tripped my mother to leave with me and my sister in tow.

In 1977 I finally saw Monty Python and the Holy Grail in its entirety at the Mayflower Theater with two of my Roosevelt Junior High School friends which, in retrospect, was a better time to see it.

Always at risk of closing due to diminishing ticket sales, the Mayflower Theater took a risk on being the first movie theater in Eugene to screen a poorly promoted unknown film that was released on May 25, 1977. The previous year I’d seen a 30-second TV spot for it that blew me away so I sort of knew what to expect. That film was called Star Wars and it became a smash hit that played to packed Eugene audiences throughout the entire year, generating a windfall of unexpected and overdue revenue. Hundreds of people in town returned to see Star Wars multiple times.

I cashed in bottles for nickels to pay for many of those screenings, collected cash trimming cannabis, made two bucks an hour strolling around downtown on Saturdays wearing a canvas sandwich board advertising the Eugene Saturday Market, and doing other odd jobs for people—anything to pay for my cinematic obsession.

By August, after my 13th birthday when I had to pay the adult ticket price, Star Wars was also playing at Cinema World at Valley River Center. I saw it there several times mostly because it was showing on a better screen with better sound and better seats. The first time, the manager at Cinema World didn’t believe me when I told him I was twelve. He said, “What’s your phone number?” I told him and he called my mother and asked her the dreaded question, “How old is your son?” I thought I was sunk but she didn’t miss a beat and said I was twelve. I could tell by the scowl he gave me when he hung up the phone that he didn’t believe either of us, but he let me in to see the show for the 12 and under ticket price.

At an October 31st showing back at the Mayflower there was an authentic looking Darth Vader flanked by two stormtroopers holding court in front of the theater and many people were dressed as other characters from the movie. That cosplay continued to be the norm long after Halloween and from then on there was always a Darth Vader with a stormtrooper entourage.

One very memorable evening early in November of 1977 I was in line at the Mayflower to see Star Wars for the 26th time and there was a Hollywood film crew set up across the street in front of the Dr. A.W. Patterson House at 751 East 11th Avenue—a house that had been a fraternity in the 1960s—and that house would be immortalized in 1978 as the notorious Delta House fraternity featured in National Lampoon’s Animal House.

That night we witnessed a mannequin thrown out of the second-story window of the house and watched as Tom Hulce and Stephen Furst, two young actors we would get to know the following year as Pinto and Flounder, step over the body and walk up the steps.

In December 1978 The Rocky Horror Picture Show was screened for the first time as the Saturday Midnight Flick at the Mayflower, and it played every Saturday night at midnight for a very long time. How long? I don’t know, but it was playing in the winter of 1979, when I saw it for the first time (in drag) with a few girls I knew from drama class at South Eugene High School. The movie was such a successful money-maker for the Mayflower that the manager at the time, John Deskowitz, had a cavalier attitude about the extra work and cleaning cost from all the rice, popcorn, toast, toilet paper, hot dogs, and panties that were tossed around by audience members during the show.

Fast forward to the 1980s and the final days of the Mayflower Theater . . .

Back To The Future, starring Michael J. Fox and Christopher Lloyd, opened July 3, 1985, and I saw it for the first time on August 23rd, 1985, the day I returned to Eugene from misadventures I’ve written about elsewhere.

White Knights, with Mikhail Baryshnikov and Gregory Hines, was released on November 22, 1985.

As for the Mayflower Theater . . .

It was torn down by a demolition crew by order of Sacred Heart General Hospital on Monday, March 3, 1986, one day before a scheduled Eugene Historic Review Board hearing that could have resulted in the building being designated a historic landmark.